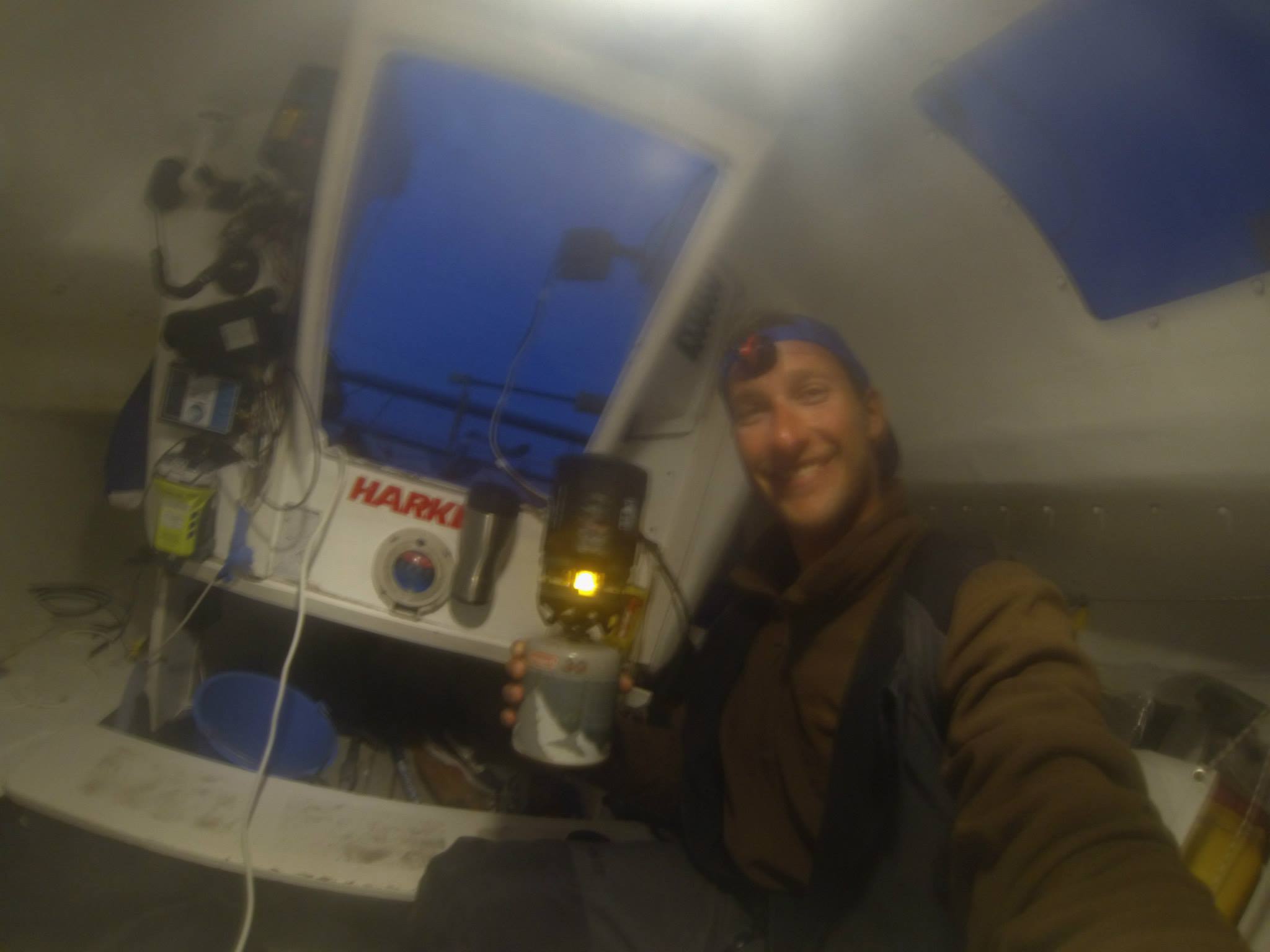 Sam Holliday   |   Uncategorized   |   No comment
See part 1 before reading. After I fixed the autopilot I found new wind. It’s amazing how emotional you get when the whole year’s project comes down to a stupid little autopilot ram. Nonetheless I fixed it and more importantly, trusted my fix. Essentially, the ram that moves back and forth to steer the boat kept seizing. I didn’t know why until I opened up the ram and noticed that all the ball bearings that hold the ram in place had fallen out. Every time I put them back where they should be they just kept falling out. I then changed the position of the spacers to keep them in and the ram worked. I also changed out the DC motor for a new one. She was as good as new. After sleeping for a while it was time to think strategy. The chat on the dock prior to the race was to go south. The high pressure system looming over the Azores produced some downwind sailing conditions if we went far south after Cape Finistere, then after a few hundred miles turn right and head west towards the Azores. This strategy would almost guarantee that you had wind most of the time, but meant you would sail more miles then if you just pointed at the Azores. After stopping I knew I was at the back of the pack, if not last, but also knew how long the race was, and that there was always a chance of making up miles if I pushed hard. I put the big kite up and headed south. It was awesome! Blasting along at more then 10 knots. Surfing all the way. I would be at the Azores in no time! I sailed for maybe 100 miles until I turned slightly more right. By this time the sun was out, and the wind was starting to come down to something a bit more chilled out. I had three days of this. Absolutely beautiful weather! Sunscreen was a must and I wore my tilley hat to try and stay cool. 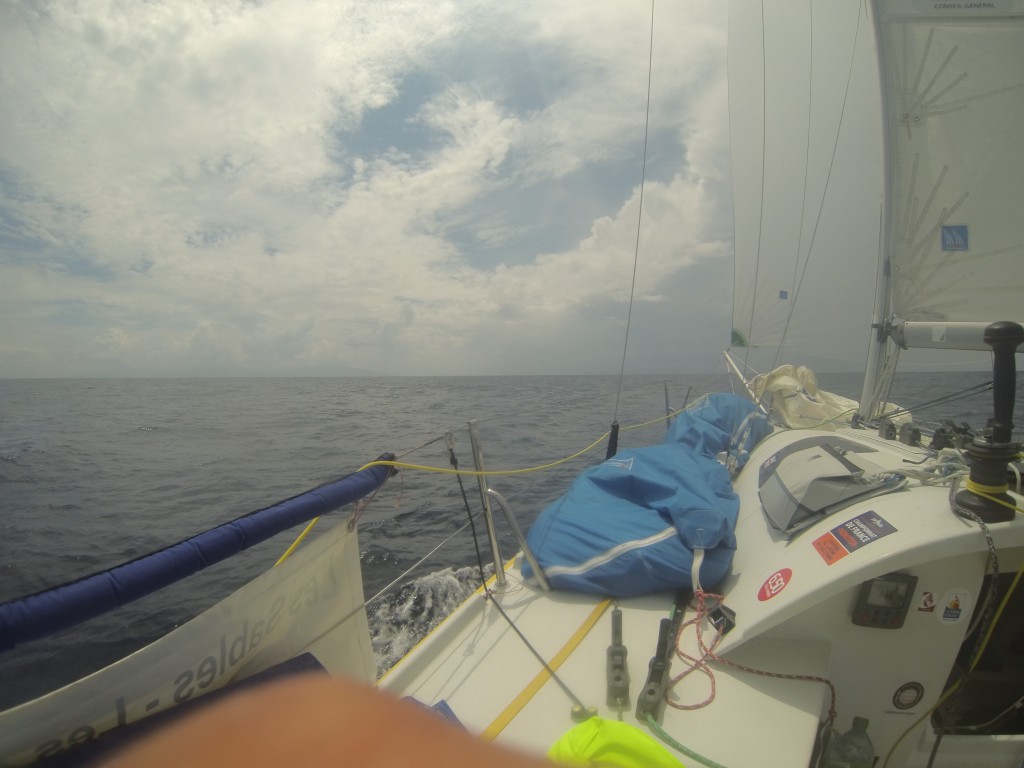 Music also helped me along the way. I had a little iPod shuffle with about 80 songs on it and I can tell you now I know everyone of those songs by heart. It sounds exciting but to be honest this part of the race was almost the most boring. Nothing broken, nothing to fix, no storms to battle. I was definitely happy I had no breakages but it was just the case of plodding along, trying to trim the sails as perfectly as possible. To pass the time I played a game called “Beat the Pilot”. I would put the pilot on for half an hour while I ate or slept or did something, then I would check how far I had gone in the half an hour. I would then drive for half an hour and see if I could beat the pilot. Many times I beat the pilot but I noticed that it drove in a much more straight line then I did. Understandably so, as it drives off a compass course. 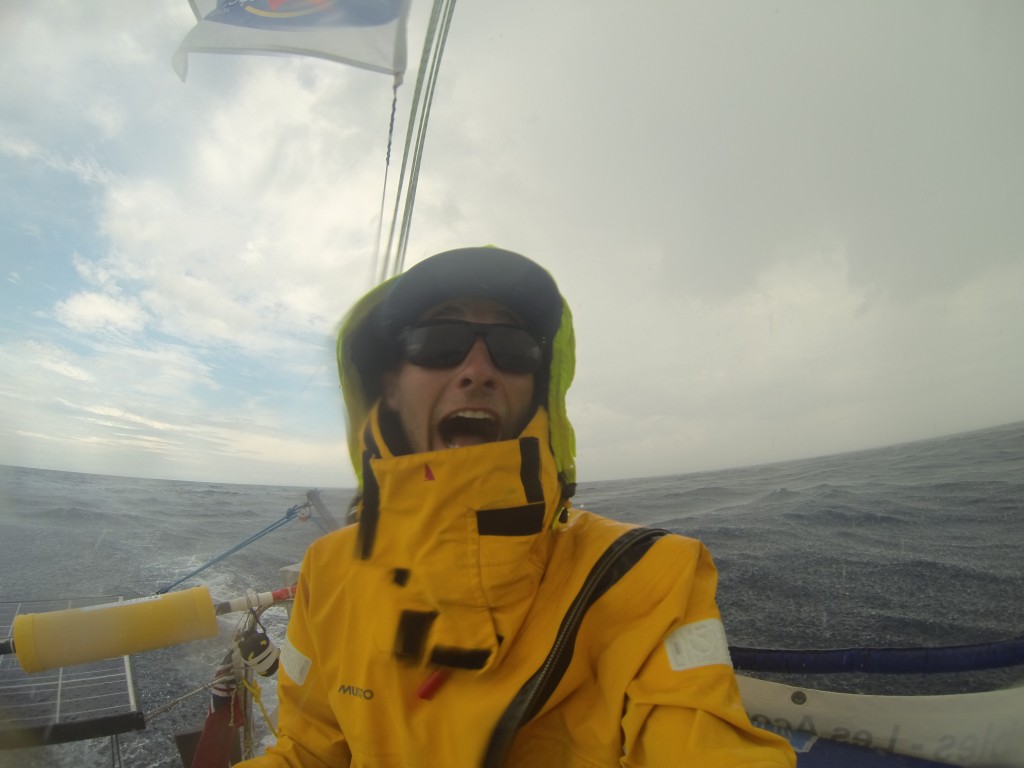 All on board was pleasant until the evening of day 5 or 6. (The days all meshed into the next so I cant really remember which day it was haha) I was reaching along with the Code 0 up, and I noticed a knocking. It had been going all day and I thought it was just a block knocking against the deck. I searched for the sound but couldn’t figure it out. I checked the pilot thinking it was broken again but even when I hand steered it sounded again. Finally I checked the gudgen. (The fitting at the back of the boat where the rudder attaches to). Turns out the bolts holding it to the back of the boat were coming loose and if I didn’t do something about it soon my rudders were in real danger of braking. Quickly I went down below and tightened the bolts up. Problem solved. I even put another bolt and some lock tight on it to be extra sure it wouldn’t come loose again. I came back on deck and all was good. I looked over the back of the boat to make sure it had been sealed flush with the back of the boat and notice another problem. A huge problem. My rudders had split down the centre of them. Both of them. You might recall a few weeks ago when I was in Douarnenez, I posted pictures of me fixing my rudders. This fix didn’t hold. Since the boat was going quite fast the rudders were in real danger of snapping, and I didn’t have any spare to put on. I felt sick. This wasn’t a quick fix job and I knew it. I was several hundred miles from Portugal and a lot more miles to the Azores. Not a good feeling to be in the middle of the Atlantic, alone, on a broken boat. I started thinking of solutions and the only thing that came to mind was stop, take the rudders off and fibreglass them back together again. It was a lengthy process because I needed to wait for the resin to dry before putting them back on the boat. This takes about 6 hours. It was my only option. I took the sails down, unbolted them and began to work. First I had to sand the crack down, and then prepare the resin. Once ready I put some on the rudder, followed by a sheet of fibreglass. More resin, then more glass. I did about four layers of little strips to make sure the fix would be strong. Once finished I started to wait. By this time the sun was down and by chance it started to rain. I put the rudders inside so they wouldn’t get wet and the fix would be ruined. This meant that the inside of the boat smelled like resin, which gave me a huge headache and I started to feel dizzy. The only thing to do now was wait. The support boat had been instructed to come and check my boat out after they saw on the tracker I wasn’t moving. 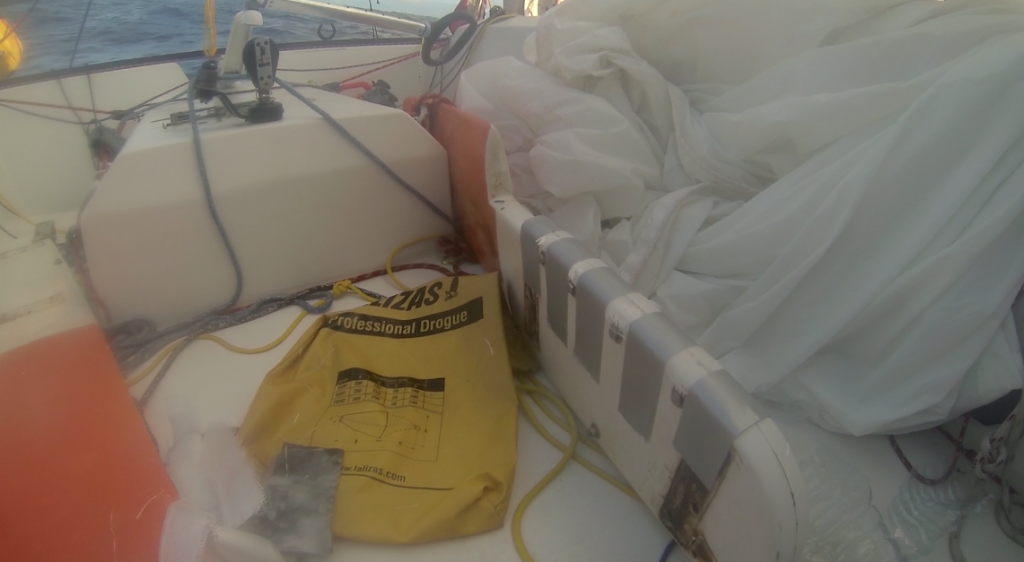 They showed up about 1130 and after a quick radio discussion, they were informed of my misfortune. The skipper on board gave me some Swiss chocolate to make me feel better. It really helped! I waited until the sun came up and checked the repair. It was good!!!! Quickly I put the rudders on and the sails were back up! A lengthy ordeal, but something I really feel I persevered through. It didn’t feel good to know I wasn’t competitive now, but it felt good to know that I could fix just about any problem I had on board with the materials and tools I brought. Some might call it good planning. 😉 The sun started to get hot so I went to sleep. Large fix number two was behind me and I was praying for no more breakages before I got the to the Azores.
No Comments